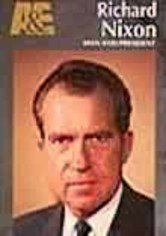 1997 NR 0h 50m DVD
This in-depth biography paints a revealing portrait of an ambitious, astute politician brought down by his cover-up of a third-rate burglary. From modest California roots, Richard Nixon rose to power as a senator and vice president but suffered a series of stinging electoral defeats before sweeping into the Oval Office. Scrapbook snapshots and interviews with Nixon's friends shed light on one of the 20th century's most complex and compelling men.