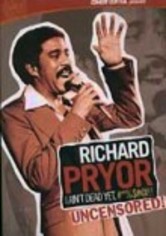 2004 NR 0h 42m DVD
Comedian Richard Pryor may have multiple sclerosis, but as the title of this eponymous disc says, he ain't dead yet. And he invited a few friends -- including Dave Chappelle and Jamie Foxx -- to celebrate that fact. Whoopi Goldberg, D.L. Hughley and George Lopez also witness Pryor as he plays host for the get-together, which originally aired on Comedy Central and features clips of his concert appearances, recordings and excerpts from his diary.