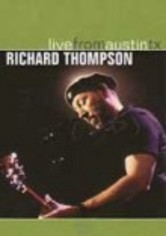 2005 NR 1h 30m DVD
Although not a household name, British veteran guitarist and songwriter Richard Thompson has earned the esteem of fellow musicians Lou Reed, John Mellencamp and David Byrne, to name a few. In this session recorded at PBS's long-running, popular "Austin City Limits," Thompson performs songs such as "Cooksferry Queen," "She Twists the Knife Again," "Easy There, Steady Now," "Put It There Pal" and "Ghosts in the Wind."