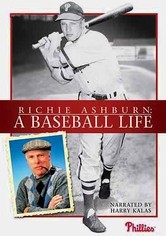 2008 NR 1h 35m DVD
An in-depth profile of Philadelphia Phillies star and longtime broadcaster Richie Ashburn, this documentary chronicles the sports legend's life, from his Nebraska childhood all the way through to his induction in the Baseball Hall of Fame. Narrated by fellow broadcaster Harry Kalas, the program recounts Ashburn's story through interviews with his family and friends, broadcast footage and Ashburn's own home movies.