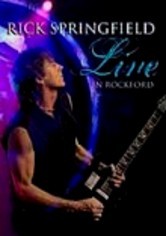 2006 NR 1h 19m DVD
Heartthrob Rick Springfield performs "Jesse's Girl" and other hits before a capacity crowd at the Coronado Theatre in Rockford, Ill., in this concert video (which also features an interview with the 1980s pop star). Springfield proves he can still make ladies swoon as he treats the audience to old favorites along with tunes from his later albums. Tracks include "I've Done Everything for You," "Baker Street," "Don't Talk to Strangers" and more.