Rick Wakeman: Out There 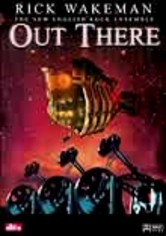 Rick Wakeman: Out There

2004 NR 0h 58m DVD
Get ready to be visually and aurally mesmerized by what amounts to a 21st-century interpretation of the progressive rock album "Out There" by Rick Wakeman & the New English Rock Ensemble. This video features computer-generated graphics and includes tracks such as "The Mission," "To Be with You," "Universe of Sound," "The Cathedral of the Sky" and much more.