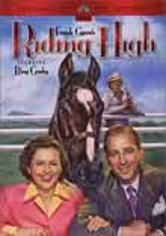 1950 NR 1h 52m DVD
Frank Capra's remake of his 1934 film Broadway Bill, Riding High stars Bing Crosby and Colleen Gray. The story centers on Dan (Crosby), a wealthy lad who enjoys betting on horse races and is set to marry a stuffy gal (Frances Gifford). Dan dislikes the family business and hits it off with his fiancé's fun-loving sister, Alice (Gray), who also loves the racetrack. Set on financial independence, Brooks bets it all on a steed named Broadway Bill.