Riding on Air / When's Your Birthday? 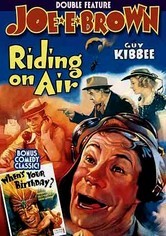 Riding on Air / When's Your Birthday?

1937 NR 2h 14m DVD
Joe E. Brown stars in this double feature that showcases the comic talents that would later bring him worldwide fame playing his most memorable role as the suitor of Jack Lemmon's female persona in the 1959 classic Some Like It Hot. In Riding on Air, Brown portrays a newshound who unwittingly leads some small-town citizens into a shady investment scheme, and in When's Your Birthday, mobsters force Brown's affable astrologer into the boxing ring.