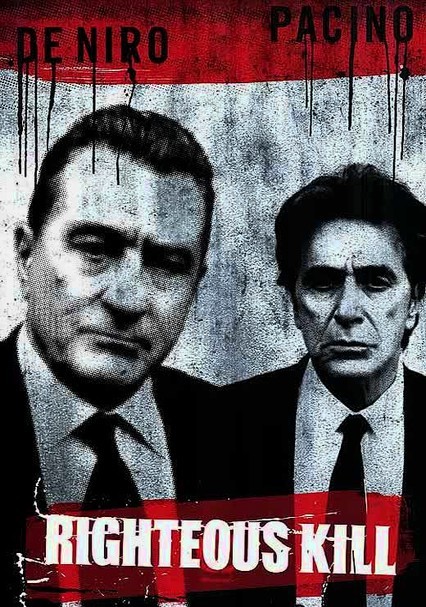 2008 R 1h 43m Blu-ray / DVD
Oscar winners Robert De Niro and Al Pacino drive this taut thriller as New York City detectives tasked with investigating a rash of vigilante killings that are linked to an old case, suggesting they might have put an innocent man behind bars.

Parents need to know that from the very first scene at a police target range to the final sequence in which the killer is revealed, this crime thriller is all about guns, bullets, body count, serial murders, bloody victims, and vigilantism. The killer is on a crusade to administer "justice" in cases in which the legal system has failed. Victims are shot at point-blank range in several sequences, and language is consistently crude and harsh. The limited sexuality between two adults is loveless and highlights "rough" sex. A young woman snorts cocaine in a nightclub bathroom.

Woman appears to be object of stalker and is grabbed from behind -- but then consensual sex begins off-camera; "rough" sex glimpsed briefly once from a distance; sexual innuendo in male-female police banter.

Lots of images of point-blank shootings, resulting in bloody deaths; a woman is attacked and beaten by an unseen assailant as she enters bathroom; bloody face of dead 10-year-old girl is revealed; close-range shoot-out between two cops and drug dealers; priest is shot while taking confession; baseball brawl between adult males; beating and kicking of handcuffed suspect by police.

Constant cursing from beginning to end. Nonstop use of multiple forms of "f--k," "s--t," "a--hole." One racial insult.

A serial murderer justifies behavior by killing only those who have escaped punishment and "deserve it." Cop is seen as heroic when he frames a known murderer for something he didn't do.