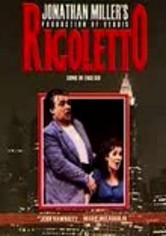 2006 NR 2h 10m DVD
In this imaginative staging of the Verdi opera, director Jonathan Miller transplants "Rigoletto" from 16th-century Italy to 1950s Little Italy in New York, where the titular hero (John Rawnsley) is a wisecracking bartender in the mob-ruled underworld. Marie McLaughlin plays his beloved, doomed daughter Gilda. Arthur Davies is the Duke. James Fenton supplies the English libretto for this 1982 performance by the English National Opera.