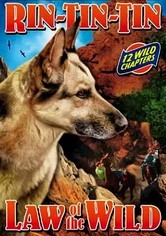 1934 NR 3h 45m DVD
In this 12-chapter Mascot serial, rancher John Sheldon (Bob Custer) is falsely accused of murder, and his police dog, Rinty, and wild stallion, Rex, get caught up in the case, as Alice Ingram (Lucile Browne) decides to race Rex in order to raise money for John's defense. Meanwhile, Frank Nolan (Richard Cramer), who is responsible for framing John, plots to steal the stallion out from under his nose. It's up to Rinty to save the day.