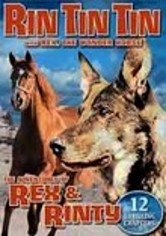 1935 NR 3h 40m DVD
The stage is set for action and adventure when a hallowed Arabian stallion named Rex is spirited away to America from a South Seas island and sold to an affluent, conniving rancher (Harry Woods) in this 12-chapter serial. But Rex soon escapes to the open range, where he joins forces with nomadic German shepherd Rin Tin Tin. Can the unlikely animal allies elude the rancher's henchmen with help from a human friend?