Ring of Fire: An Indonesian Odyssey 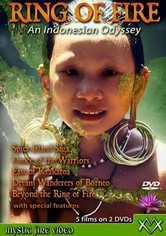 Ring of Fire: An Indonesian Odyssey

2003 NR 2 discs
Filmmaker brothers Lorne and Lawrence Blair spent a decade traveling through Indonesia's chain of volcanic islands known as "The Ring of Fire" and recording their experiences in these four fascinating films. Their adventures include trekking through hundreds of miles of unmapped rainforest, observing the giant "dragons" of Komodo, hanging out with headhunters in New Guinea, and standing on a volcano crater shortly after an eruption.