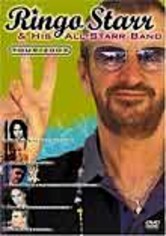 2004 NR 1h 40m DVD
Ringo Starr and His 8th All Starr Band (Paul Carrack, Colin Hay, Sheila E., Mark Rivera and John Waite) perform at Toronto's Casinorama during their 2003 tour in this concert video. The video also features up-close-and-personal backstage footage from Toronto, New York and San Diego. Songs include "With a Little Help from My Friends," "Boys," "Honey Don't," "I Wanna Be Your Man," "It Don't Come Easy" and "Yellow Submarine."