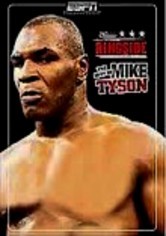 2006 NR 2 discs
Mike Tyson was once the toughest man on the planet, as amply documented in this retrospective of his turbulent career. Crowned as the youngest heavyweight champion ever, Tyson was unstoppable for many years. But by 1997, when he bit an opponent's ear, he had become a joke. Through footage of classic bouts and commentary from key boxing figures, you'll witness Iron Mike's ascent to the peak of his sport -- and his eventual tumble.