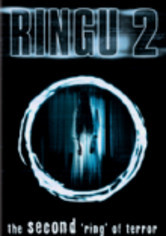 1999 NR 1h 35m DVD
Stringy-haired Sadako returns in this chilling sequel to the film that spawned a fear of unlabeled videotapes. On a quest to find out what happened to her beau (Hiroyuki Sanada), Mai Takano (Miki Nakatani) learns about a strange movie that kills the viewer one week after watching it. But can Mai stop her boyfriend's ex-wife (Nanako Matsushima) and his young son (Rikiya Ôtaka) from paying it forward?