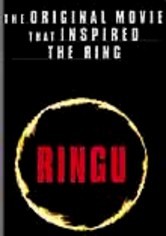 1998 NR 1h 40m DVD
Based on the book by Koji Suzuki, this earlier Japanese version of the hit American movie The Ring is creepy in the extreme. After watching a mysterious videotape, a group of teenagers die gruesomely. The video becomes an urban myth. But an insidious force points a deadly finger at unwary souls unable to resist their curiosity -- people such as Reiko, a journalist who's unwillingly drawn into a nightmare by the unseen threat.