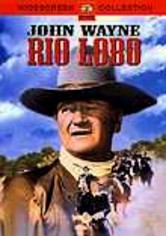 1970 G 1h 54m DVD
At the end of the Civil War, Union Army colonel Cord McNally (John Wayne) recovers gold stolen by a group of Confederates, and roots out a traitor who killed some of his own soldiers during the heist in legendary director Howard Hawks's final film. This Western -- which was filmed in Mexico and Arizona -- co-stars lazy-eyed Jack Elam and future Hollywood studio executive Sherry Lansing in a small role.