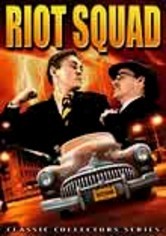 1941 NR 0h 56m DVD
Dining in a local nightclub with his fiancée, the idealistic Dr. Tom (Richard Cromwell) witnesses a shoot-out that claims the life of a cop and critically wounds a mob boss (John Miljan). But to find out who pulled the trigger, Tom will have to go undercover as the gangster's personal physician, a task that tests his brains and brawn. Rita Quigley co-stars as Tom's bride-to-be in this 1940s mystery-thriller directed by Edward F. Finney.