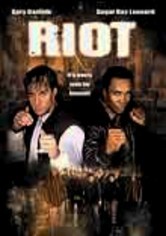 1996 R 1h 40m DVD
Turf wars erupt one Christmas Eve in Florida, prompting the swift and united action of multiple authority groups. But the stakes are raised when the British Ambassador's daughter is kidnapped amid the mayhem, and it becomes clear that only one man can save her: Special Agent Shane Alcott (Gary Daniels), whose credentials are unmatched. Will he be able to penetrate the kidnappers' guarded presence and rescue her? Co-stars Sugar Ray Leonard.