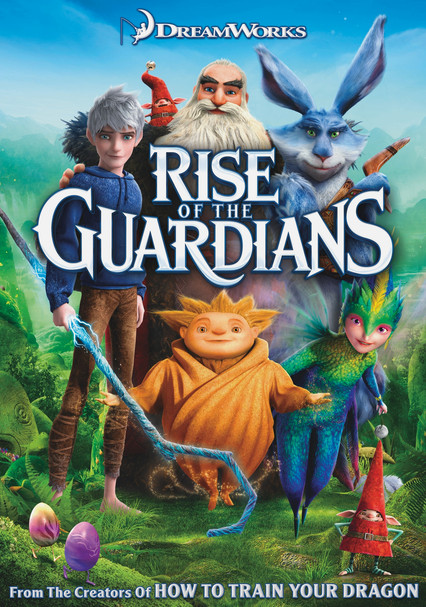 2012 PG 1h 37m Blu-ray / DVD
In this animated adventure, Santa Claus, the Easter Bunny, the Tooth Fairy, the Sandman and Jack Frost come together to battle Pitch, a malicious spirit determined to take over the world and destroy the innocent beliefs and dreams of children.

Parents need to know that Rise of the Guardians is sort of like The Avengers with childhood icons: Santa Claus, the Tooth Fairy, the Easter Bunny, and the Sandman. There's lots of action and some mild violence revolving around the menacing bad guy Pitch Black, who turns children's dreams into nightmares with his cavalry of scary stallions (some scenes may feel more intense in the movie's 3-D version). (Spoiler alert!) One Guardian is destroyed but comes back to life at the end of the movie. There's some insulting language like "coward" and "selfish" and "go suck an egg," and in a flashback, a main character drowns but transforms rather than dying. Whether they personally believe in these characters or not (and the nontraditional way they're portrayed here could get some of them wondering...), kids will root for the Guardians as they fight the forces of chaos and despair.

The Tooth Fairy seems smitten with Jack Frost, and a couple of her "baby" fairies swoon in his presence. In one brief scene, Tooth and Jack share a moment of staring in each other's eyes.

(Potential spoiler alerts!) Some intense action. Pitch Black and his minions are able to destroy one of the Guardians. The other Guardians begin to lose their powers as children stop believing in them. Pitch cleans out the Tooth Fairy's castle, breaks all of the Easter Bunny's eggs, and generally breaks the hopeful spirit of all the children he encounters. He undoes the work of the Sandman so that kids have nightmares instead of sweet dreams. Pitch's shadowy black stallions can be frightening. In a flashback, viewers see that the boy who was Jack Frost drowned saving his sister and then transformed into the icon of winter. Santa uses swords.

Australian Easter Bunny says "bloody" this and "bloody" that fairly frequently; Pitch Black tells Bunny to "go suck an egg," and some insults are thrown back and forth, including "coward."

The movie stresses the importance of the wonder of childhood, including belief in Santa, the Tooth Fairy, the Easter Bunny, etc. Preserving the innocence and joy of childhood is the reason the Guardians exist. Although the movie isn't religious, the idea of faith in something you can't necessarily see is demonstrated as a positive force in children's lives.

No product placements in the movie, but there's a good bit of Rise of the Guardians merchandise available, from plush sets and figurines to games, apparel, calendars, and more. The story is also based on a book series.