Road to the Presidency 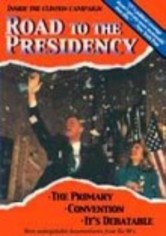 Road to the Presidency

2004 NR 2h 30m DVD
In the 2004 election year, politics once again took center stage on most news broadcasts and cable news networks. Directed by Scott Jacobs, this timely release provides a three-part, documentary-style outline of the 1992 presidential race that pitted George Bush against Bill Clinton, covering everything from the primary elections to the conventions and debates.