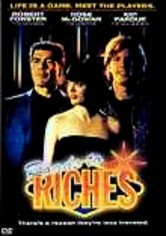 2001 R 1h 28m DVD
Middle-aged Jack (Robert Forster) has kept little from his days as a child star except a few memories. Still holding fast to his dream of acquiring riches, he latches on to Henry (Kip Pardue), who has good luck to spare. But rather than have his luck rub off on Jack, Henry sweeps the beautiful young Moira (Rose McGowan) off her feet. Jack's secret love for Moira now becomes an obsession, and he risks everything he has to win her back from Henry.