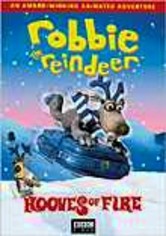 1999 NR 1h 0m DVD
Follow the claymation adventures of Robbie the Reindeer, Rudolph's son, in this double-dip of irreverent holiday cheer. In "Hooves of Fire," Robbie races his father's rival, Blitzen, to earn a spot on Santa's sleigh team. In "Legend of the Lost Tribe," Robbie and his Viking friends must save the other reindeer from Blitzen, who has turned them all into robots. This BBC production features both the British and American voice-over tracks.