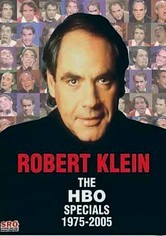 2007 NR 4 discs
Robert Klein keeps audiences howling in this hilarious collection that features all eight of his HBO comedy specials and showcases the talent that made this admired stand-up a standout. Klein lampoons politics, Viagra, college life, aging and more in these programs that span 30 years, from HBO's very first comedy special, "On Location: An Evening with Robert Klein," to 2005's "Robert Klein: The Amorous Busboy of Decatur Avenue."