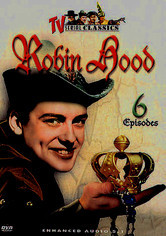 1955 NR 2h 30m DVD
Richard Greene stars as the legendary English vigilante who stole from the rich and gave to the poor in this collection of classic episodes from the long-running British television series that also found an audience across the pond. Six adventures include "Too Many Earls," "Blackmail," "The Vandals," "Dead or Alive," "The Fire" and "Brother Battle."