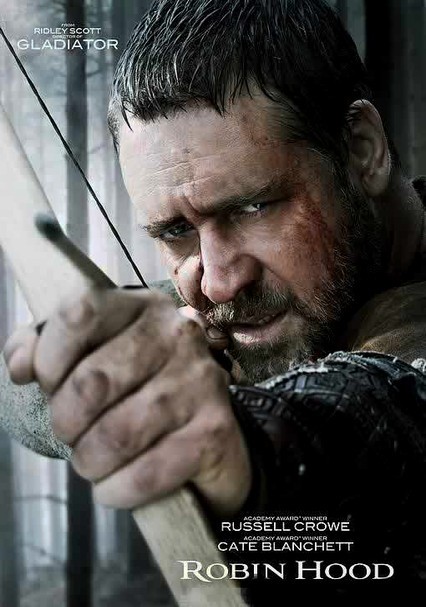 2010 PG-13 2h 36m Blu-ray / DVD
When Robin happens upon the dying Robert of Loxley, he promises to return the man's sword to his family in this big-budget twist on the classic tale. There, Robin assumes Robert's identity; romances his widow; and draws the ire of the town sheriff.

Parents need to know that this Robin Hood adaptation is quite violent: There's a lot of realistic medieval warfare (not ultra-stylized like in some other movies) in the two-hour-plus movie, and a significant body count. Otherwise, there's just a few scenes of sexuality: one couple is interrupted in bed, but there's no nudity, plus some kissing, flirting, and innuendo. A few scenes show the Friar and Merry Men drinking too much honey mead or wine, and the language is limited to insults like the occasional "bastard" or "traitor." On a positive note, the rights of all individuals and villagers are championed over the tyrannical rights of the king.

The prince is obviously naked in bed with his mistress, when his mother walks in; he stands up naked to talk to her (we only see his lower back). Robin stares at Marian's behind and at her silhouette undressing behind a curtain. The Merry Men spend "a historic night" with three Nottingham women (some kissing is shown but nothing else). Little John says "he's proportionate" despite his moniker, and then tells a very tall girl he's "going to make her smile." Robin and Marian flirt, dance, and eventually kiss passionately.

Incredibly violent, whether it's aerial shots of thousands of arrows about to descend on the French, cauldrons of hot oil splashing down, or hand-to-hand combat. The action is nearly relentless in the first and last parts, and the battle scenes include deaths via weapons such as arrows, spears, swords, knives, sticks, stones, burning bags of oil, and fists. In several scenes, entire towns are sacked and their inhabitants herded and burned alive (or almost burned alive).

Very mild; just some insults like "little bastards," and insinuations about the proclivities of Welshmen. A few exclamations of "Christ."

The messages include: the "inalienable rights" of individuals to their own land, their own food, their own ability to provide for their families is greater than the "sovereign rights" of a dynastic king. The central idea is that if a law is deemed immoral by most people, one should not obey it.

The Merry Men (and the entire adult population of Nottingham) drink to excess on more than one occasion (on the ship and then in Nottingham, thanks to Friar Tuck's homebrew of honey mead). They're shown nearly passed out from drink. Sir Locksley keeps asking for more wine for him and Robin and later comments on how wonderful it is to hear everyone in Nottingham indulging themselves and having fun.