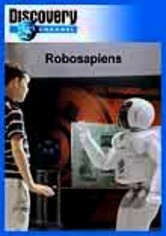 2004 NR 0h 50m DVD
For decades, scientists have said that the biggest hurdle to creating the ultimate robot is the difficulty in replicating human emotions. But that final frontier may soon be traversed -- a fact that researchers in this Discovery Channel documentary are beginning to understand and accept. That's because in Japan, experts have come close to building machines that not only think but &NFifeel&NFi_;, bringing their inventions one step closer to being human.