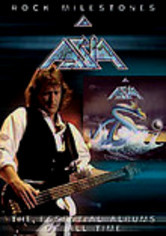 2006 NR 1h 30m DVD
The first supergroup of the 1980s, progressive rock band Asia included former members of Yes, Emerson Lake and Palmer, King Crimson and the Buggles. Their self-titled debut album went multiplatinum and included the huge hit singles "Only Time Will Tell" and "Heat of the Moment." This program explores the success of the album and dishes up classic performances of "Heat of the Moment," "Sole Survivor," "One Step Closer," "Time Again" and more.