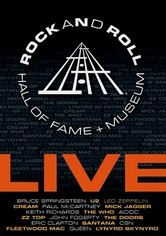 2009 NR 3 discs
Twist and shout all night long with this compilation of spirited musical performances filmed at the annual induction ceremonies for the Rock and Roll Hall of Fame, including stints by U2, The Who, Paul McCartney and Eric Clapton. Other gods from the rock 'n' roll pantheon enchanting the crowds include Bruce Springsteen and the E Street Band, Fleetwood Mac, Roy Orbison, Bob Dylan, Jackson Browne and many more.