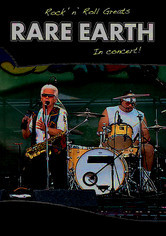 2004 NR 1h 0m DVD
Performance footage of the elusive band Rare Earth is a rare and wonderful thing indeed when you can see it. This video captures the band during their reformation in 2004, when they performed a choice selection of their most popular songs. Psychedelically inclined but mustering a commercial edge that won over many fans, the band was a natural when they performed in live arenas.