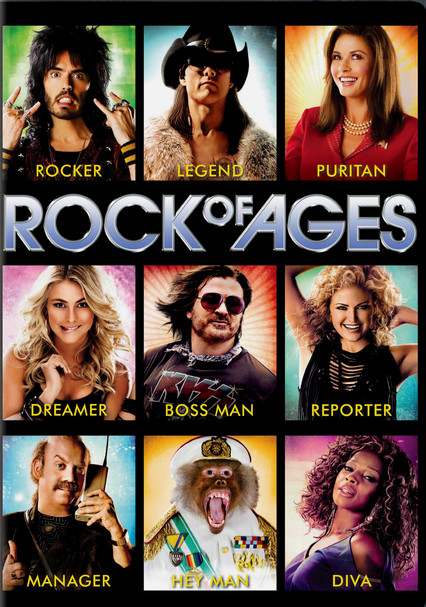 2012 PG-13 2h 3m Blu-ray / DVD
In the 1980s, Los Angeles' famed Sunset Strip is pulsing to a beat that attracts waitress Sherrie and busboy Drew, who fall in love and chase fame while working at the Bourbon Room, a club catering to rock royalty like Stacee Jaxx.

Parents need to know that Rock of Ages is based on a Broadway musical comedy about rock 'n' roll, of which there is plenty (particularly heavy-metal hits from the '80s). There's also a lot of drinking, especially by an often-wasted star whose favorite drink is scotch, straight from the bottle, but no drugs or smoking. Words like "s--t" and "ass" are used (plus one "f--k"), and there are many suggestive scenes (think writhing, willing groupies and strip clubs) -- though there's no graphic nudity, and the sex scenes are more choreographed dance than erotica. The star-studded cast includes Alec Baldwin, Tom Cruise, Julianne Hough, Catherine Zeta-Jones, and Russell Brand.

Lots of suggestive scenes, exaggerated cleavage, and innuendo throughout, including scenes that suggest couples are about to or have just finished having sex. In one scene a couple is passionately kissing when a bunch of packaged condoms fall on them. A rock legend is almost constantly surrounded by scantily clad groupies writhing suggestively. He frequently greets women by groping their chests and passionately seduces a music journalist in a scene that features plenty of implied activity and a woman in her underwear, but no graphic nudity. Opposite- and same-sex couples kiss romantically, while others kiss with so much excess tongue activity that it's clearly played to be way over the top. A cocktail waitress at a strip club must endure unwanted touches from her customers; eventually, she considers dancing herself.

Some heated arguments and one powerful slap when a guy says something especially spiteful to his soon-to-be ex-girlfriend. Bouncers sometimes throw people out of nightclubs, and a few bodyguards growl menacingly. A pet baboon throws things at people he dislikes.

Drew is hoping to make it as a rock singer in Los Angeles, but he loses track of his identity when a slimy manager tries to remake him into whatever might sell. His girlfriend's faith helps him rediscover himself and salvage a budding musical career that was almost scuttled by a detour into boy-band territory.

Visible brands/products include Greyhound buses and Budweiser beer. The sets are filled with signage for brand names, and many well-known Los Angeles businesses are shown. Many famous rock bands are name-checked, often by showing their albums.

No smoking or drugs (a bit of a surprise in a movie about rock stars), but lots of drinking. Much of the film takes place in nightclubs where many people are drinking, and some get quite drunk. A rock legend is almost always wasted; his preferred drink is scotch, straight from the bottle.