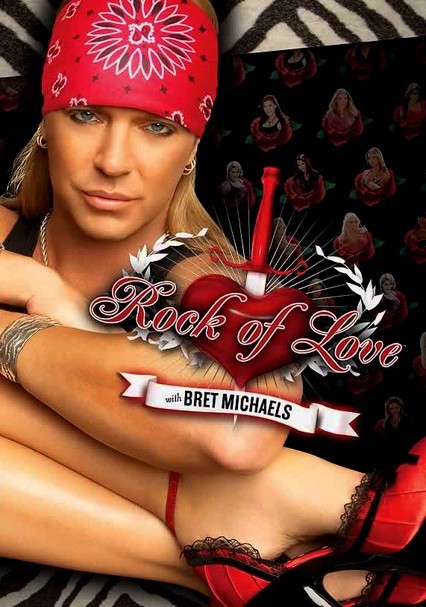 2007 TV-14 1 season
Ready to ditch the groupies and find lasting love, Poison front man Bret Michaels uses the reality TV circuit to search for a girlfriend. Contestants submit to unusual challenges to see if they've got what it takes to tame the bad boy. The bodacious babes compete at various tasks, including crafting song lyrics, enduring tour bus boredom and playing mud football, with vacations, celebrity meetings and time alone with Bret as the rewards.

Bret Michaels, lead singer of 1980s hair-metal band Poison, prowls for true love in this show, with 20 women competing for his heart. Which "babe" can handle the rock 'n' roll lifestyle with her sex appeal intact? Each week, the ladies encounter a new challenge, from backstage mayhem to tour bus boredom. Competition is fierce, but one by one, Bret narrows the field, and in the end, only one woman can be the ultimate rock star girlfriend.

Parents need to know that this reality show follows the formula of many Bachelor-type series, but takes it to a raunchy level. The women competing for the top spot as rocker Bret Michaels' girlfriend are, for the most part, infantile, catty, and promiscuous. Most have large, prominently displayed breasts (in at least one instance, said breasts are visible, though blurred, onscreen), and most rely primarily on their bodies to attract Michaels (in one scene, a woman straddles him, hikes up her skirt, and grinds against his pelvis). Most of the women get extremely drunk, and some are unable to form comprehensible sentences. Michaels lavishes praise on the women for their looks, while paying lip service to brains and personality. While some women seem friendly toward one another, most are meanly competitive, insulting one another and even engaging in minor physical battles.

Most women wear revealing clothing and bare a lot of cleavage. At least one woman bares her breasts onscreen, though they're blurred out. One gives Michaels a lap dance, and her underwear is momentarily visible. Discussion of "cold showers," "beat[ing] my penis to a pulp," and wanting to "f--k Bret Michaels." Also scenes of women leading Michaels upstairs toward bedrooms. Pole dancing.

Constant stream of profanity, with the strongest words (like "f--k," which is used frequently) bleeped. Words like "ass," "crap" and "hell" aren't bleeped. Lots of sexually oriented language like "slut," "whore," "bitch," etc.

The show teaches the lesson that it's OK to be mean to other people in order to win a competition, reinforces stereotypes about women as sexual objects, and downplays women's intellect. It offers a confusing message to younger viewers, who might wonder why these women are disrespecting themselves in such a public forum.

Promotes Michaels and his band.

Alcohol use is rampant. Some women get so drunk that they can barely hold their heads up and can't form coherent sentences. One rule announced by the security guard is "no puking in the pool." Jokes about being alcoholics. Some smoking.