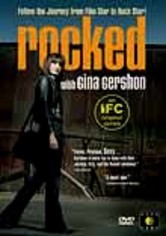 2004 NR 2 discs
Follow Gina Gershon as she shifts from actress to rock star in this six-episode series originally shown on the Independent Film Channel. To promote her film Prey for Rock and Roll, Gershon and indie rock band Girls Against Boys set out on a multi-city tour with only two weeks of rehearsal. Their cameras caught all the ups and downs of touring, including a bomb scare and a visit to a sex shop. Lenny Kravitz and Chris Rock also appear.