Rocket Power: Island of the Menehune 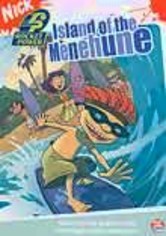 Rocket Power: Island of the Menehune

2004 NR 1h 40m DVD
Cable channel Nickelodeon's animated children's television series "Rocket Power" is propelled to the silver screen for the first time with this full-length feature film that follows the exploits of Otto Rocket, Reggie, Twister and Sam. Armed with a spirit for adventure, they embark on a Hawaiian extreme sporting escapade. But amid the killer surfing and skating, the gang also finds a spooky spirit in the jungle!