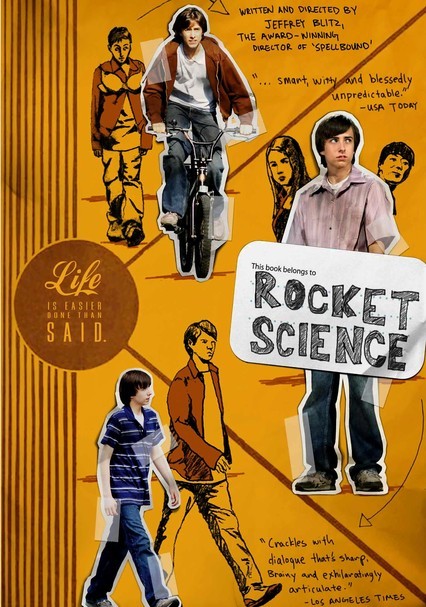 2007 R 1h 41m DVD
When 15-year-old Hal Hefner (Reece Thompson) -- a New Jersey boy with a terrible stutter -- falls in love with the star of his high school debate squad (Anna Kendrick), he joins the team at his dream girl's urging and finds himself caught up in some intense competition. Writer-director Jeffrey Blitz won the Dramatic Directing Award at the 2007 Sundance Film Festival for this coming-of-age charmer, based in part on his own adolescence.

Parents need to know that this quirky teen comedy is pretty mild for an R-rated film (think Rushmore rather than Superbad). It does include some language ("s--t," "ass," etc.), shots of teens kissing, a couple of conversations about sex, and one scene of the protagonist drinking, but for the most part it's a clever, unconventional teen flick that follows a misfit, stuttering guy who joins the school debate team.

Teen couples kiss; Hal and Ginny make out in a janitor's closet; Hal hears his mom having sex with a neighbor; Hal and his brother discuss oral sex and "bases." Illustrations from the Kama Sutra are shown.

Hal gets pounded by his angry brother; Hal throws a cello through a window.

A teen with a severe stutter joins the debate club and finds his voice. An overly competitive girl tries to sabotage a team's chances of winning.

Hal drinks a bottle of hard liquor and then does stupid things while very drunk.