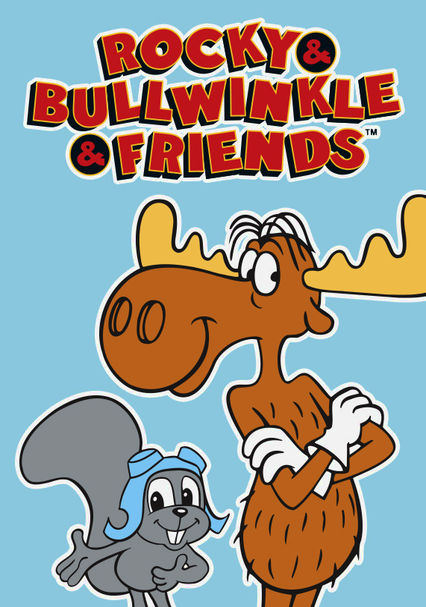 1959 TV-G 1 season
Imitated but never equaled, the wry cartoon adventures of the intrepid flying squirrel Rocky and his moose buddy, Bullwinkle, delighted kids and adults from the moment they first appeared on television in 1959. The cheeky, clever shows supplied numerous pop culture taglines and icons like the Cold War spies Boris and Natasha, and included popular non-Rocky features like the exploits of intrepid Canadian Mountie Dudley Do-Right.

Bullwinkle (voiced by Bill Scott) and his airborne pal, Rocky (June Foray), are back for a third season of high jinks in this hilarious collection of animated episodes. And what would their misadventures be without the slinky Natasha Fatale (Foray) and her squat spy-guy, Boris Badenov (Paul Frees)? Named one of &NFiTV Guide&NFi_;'s greatest shows of all time, this classic cartoon from creator Jay Ward is sure to goose your funny bone.

Parents need to know that Rocky & Bullwinkle is a relatively slow-moving retro cartoon about a talking squirrel and moose that's filled with satire that may go over kids' heads. Adults still find Rocky & Bullwinkle delightful, however, and may want to give this one a try for whole-family watching to see if it's a fit. Keep an eye out for stereotypes and slapstick violence. Boris and Natasha are constantly after Rocky and Bullwinkle, threatening to blow them up, drown them, etc. It's all played for laughs but it's still intense hearing characters in a children's show threaten to kill each other. In general though, the dry absurdity of Rocky & Bullwinkle has aged well, and parents who watched the show as children may be eager to try it out on their own kids.

Boris and Natasha sometimes leer at each other, and there are references to romance and kissing in many of the Fractured Fairy Tales.

Plenty of cartoonish violence: guns are drawn, characters get into car crashes and try to blow each other up. There are no consequences for the violence and everyone comes back just as they were. There are also references to suicide, i.e. characters putting a gun to their head in moments of despair.

No cursing, but some words will make parents wince. The characters don't shy away from calling each other "stupid," or from insulting each other in general.

The show follows the exploits of a couple of well-meaning good guys, but sometimes it's violent and displays many stereotypes, from Boris and Natasha's cliche Russians to a series of nagging overweight housewives. It's also worrisome that many of the larger characters on the show are painted as not so smart, and talk in "dumb" voices that sound like the owners have a speech problem.

Rocky, Bullwinkle, Boris, Natasha and other characters do appear on merchandise from T-shirts to keychains.

There are sometimes references to drinking that will probably pass over kid's heads, as when Boris pours something into a punchbowl that the narration says is a "Mickey Finn" but looks like booze.