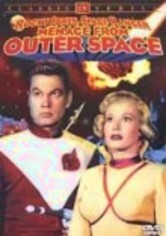 1953 NR 1h 16m DVD
When an alien missile strikes Earth, a voyage into space to determine the rocket's source leads to friction between two planets in this sci-fi adventure culled from episodes of the "Rocky Jones, Space Ranger" TV series. Believing that the projectile came from Fornax, Rocky Jones (Richard Crane) and crew set off for the distant world, where they discover that an evil mastermind has convinced the inhabitants that Earth is ready to launch an attack.