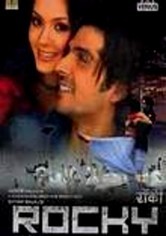 2006 NR 1h 59m DVD
Cocky, headstrong Rocky (Zayed Khan) has it in for the system. A vigilante enraged by social discrimination, he takes it upon himself to battle injustice where he sees it -- which is everywhere. Rocky's father loves his son but can't stomach his vengeful philosophy and urges Rocky to mind his own affairs. Soon, a horrific act of violence shakes Rocky to the core, and his tough talk is put to the test in this gritty Bollywood actioner.