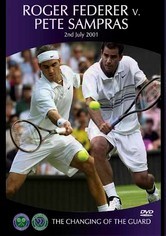 2001 NR 0h 52m DVD
On July 2, 2001, two of tennis's brightest stars faced off in this historic match as seven-time Wimbledon winner Pete Sampras battled 19-year-old Swiss phenom and Junior Wimbledon champ Roger Federer in an epic contest that lasted nearly four hours. This program features both Sampras and Federer reminiscing about the match, as well as illuminating commentary from other players, including Boris Becker and Martina Navratilova.