Roger Ramjet: Hero of Our Nation 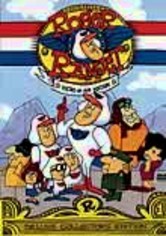 Roger Ramjet: Hero of Our Nation

1965 NR 3 discs
Catch 15 episodes featuring intrepid and ultra-patriotic superhero Roger Ramjet, the self-billed "Daredevil, Flying Fool and All-Around Good Guy" who leads the American Eagle Squadron in its fight against an organization known simply as the N.A.S.T.Y. (The National Association of Spies, Traitors and Yahoos). When he's not out chasing bad guys, Roger's simply trying to get along with his family, pals and girlfriend.