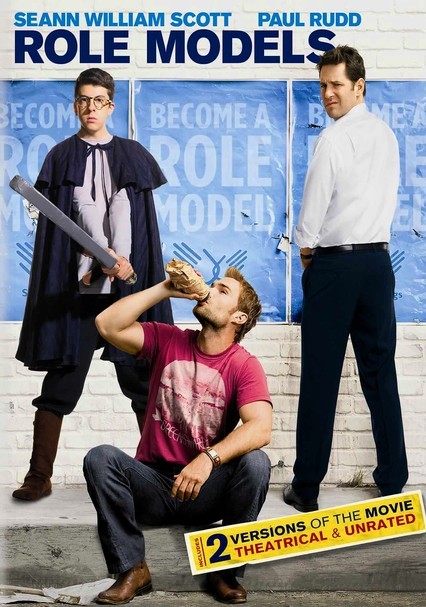 2008 UR 1h 42m Blu-ray / DVD
Danny (Paul Rudd) and Wheeler (Seann William Scott) have coasted their way through jobs at an energy drink company. But when their goofing off catches up with them, they're sentenced to community service with the Sturdy Wings mentoring program. The assignment is supposed to teach them responsibility, but it just proves that they're the last people who should be taking care of kids. Elizabeth Banks co-stars in David Wain's sidesplitting comedy.

Parents need to know that even though the cast includes young kids, this crass, Judd Apatow-esque comedy about dysfunctional mentors bases much of its humor on gross-out situations, sexual innuendo (as well as a little partial nudity), and near-incessant swearing. Old, young, man, woman -- everyone seems blessed with a potty mouth. Grown-ups discuss sex and other adult topics with children, many of whom seem incorrigible and precocious. There's also some drinking and discussion of drugs. It's all played for laughs, but it's not meant for kids.

Some partial nudity (breasts and a man's naked backside), which both a grown-up and a child seem to obsess over. A presumably naked couple makes out under the sheets (their bare shoulders are seen). An adult has explicit conversations about sex, offering detailed information to kids who are clearly too young for such discussions. References to a mother being a "whore." Shots of cleavage; a woman grabs a man's testicles and propositions him. A woman pushes a hot dog out of a bagel in a suggestive manner.

Two friends have a heavy-duty argument and tussle with the cops. A young man participates in medieval battle reenactments that involve weaponry made out of foam. A man crashes a truck into a statue in a fit of anger, which nearly lands him and his friend in jail.

As crude as can be, featuring everything from "whore" and "beeyotch" to "a--hole" and "f--k." In fact, the "F" word seems to be a favorite expletive, even among kids. One young character is particularly foul-mouthed.

Dysfunctional mentoring and parenting galore, including a couple who sees nothing wrong in verbally tearing down their son -- they make fun of his hobbies and talk about him as if he's a nerd. Men objectify women, some of whom appear to enjoy being objectified. Two men don't appear sorry for the misdeeds that land them in community service. Still, somehow, the film manages to be heartwarming, showing the transformation of two men from callow to caring.

Mentions of Ambien and the movie Reindeer Games, plus shots of signage for a burger restaurant and the fictional energy drink company that Wheeler and Danny work for.

A woman who's no longer a user nevertheless details her former cocaine habit whenever she gets the chance. A couple trips on Ambien. Some tongue-in-cheek discussions about why kids should avoid drugs, plus some scenes of social drinking, including around children.