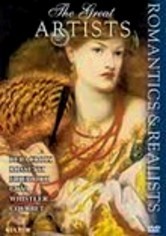 2000 NR 0h 50m DVD
Now embraced as a visionary and cultural revolutionary, Francisco de Goya created numerous masterpieces that portrayed a macabre the public had not yet seen, immortalizing his status as the father of modern art. Born in Spain in 1746, Goya was trained as court painter, eventually developing a distinctive style over the course of his prolific career. One of his greatest works, &NFiThe Third of May, 1808&NFi_;, was inspired by the Napoleonic Wars of his era.