Rome: Rise and Fall of an Empire 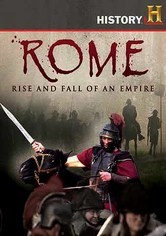 Rome: Rise and Fall of an Empire

2008 NR 4 discs
Action-packed reenactments dramatize the story of the Roman Empire in this stunning History Channel documentary series, which traces Rome from its beginnings as a struggling republic through centuries of conquest and its eventual demise. Profiles of events and people such as Julius Caesar, Constantine the Great, the Barbarian Invasion and the Invasion of Britain reveal the legacy of the empire's dramatic rise and fall.