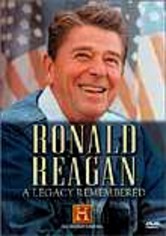 2002 NR 1h 40m DVD
The "Great Communicator" -- the 40th U.S. president -- is the subject of this in-depth documentary that draws on the insights of Ronald Reagan's political allies and adversaries alike (Mikhail Gorbachev, George Bush Sr. and Caspar Weinberger). Members of Reagan's family, including Nancy Reagan, Ron Reagan Jr. and Patti Davis, are also present to discuss his achievements and influence on the American political landscape.