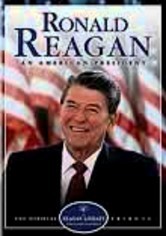 2005 NR 2 discs
During his presidency, Ronald Reagan restored the confidence America thought it had lost and earned the title of "The Great Communicator" for his steadfast devotion to democracy and unwavering guidance in all situations. This official release from the Reagan library celebrates the life and career of one of the United States' most treasured leaders. Also includes footage from Reagan's memorial service.