Ronald Reagan: His Life and Legacy 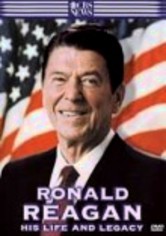 Ronald Reagan: His Life and Legacy

2004 NR 1h 27m DVD
This commemorative video examines the life and political career of the late Ronald Reagan, America's 40th president. Interviews with family members and journalists, excerpts from his many letters (read by his son, Ron) and recordings of some of his major addresses tell Reagan's story and illustrate why the man known as "The Great Communicator" had such a lasting impact on America and the world. Includes memorials and coverage of Reagan's funeral.