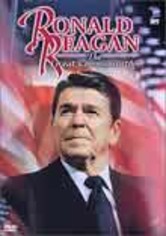 2004 NR 2 discs
From his early years as a radio sports broadcaster to a Hollywood film career to his eventual emergence as perhaps the key political figure in the latter half of the 20th century, Ronald Reagan was one of the most effective public speakers in presidential history. This unique biographical documentary explores Reagan's powerful communication skills through speeches, rare newsreels, movie footage and clips of more than 100 presidential appearances.