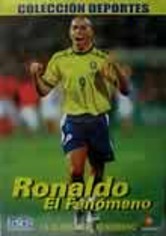 1999 NR 1h 0m DVD
Soccer great Ronaldo amazes with his ability to score, living up to his nickname "The Phenomenon." Relive the thrilling goals and victories of this Brazilian wonder, from his beginnings with Cruzeiro E.C. to Inter Milan, in this highlight reel. Fast-paced action fuels the excitement as the three-time FIFA World Player of the Year displays the moves that have taken the game -- and the fans -- to new highs.