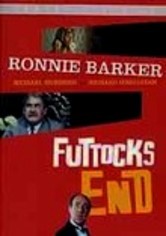 1969 NR 0h 47m DVD
Over a weekend at a decrepit English manor, the lewd and bumbling host Gen. Futtock (U.K. comedy star Ronnie Barker, who also wrote the script) competes with his equally on-the-make butler (Michael Hordern) for the affections of a beautiful houseguest. This gleefully silly 1970 comedy re-creates the silent-movie style with music, sound effects and incoherent babble in the place of dialogue. It also stars Richard O'Sullivan and Kika Markham.